Last New Years Eve (2013), six friends and myself decided to spend the evening together focusing on food that we had prepared ourselves and this together with good matching wines. In summary, that evening (i.e. the 2013 New Years Eve) ended up with 23 dishes and some really good wines and we were all very satisfied.

This New Year Eve (2014) we were only four persons. However, we still wanted to raise the bar a notch or two, but still roughly keep the numbers of dishes from last year. In summary we spend an horrific amount of efforts preparing this dinner but I can honestly say that all dishes turned out very well (apart from one small component in one of the dishes) and it is easily the best dinner I have attended in regards to “home-cooking”.

We started the dinner with a 1999 Deutz Amour de Deutz (Blanc de Blancs Brut) as an aperitif.

This first dish of our New Years menu is a twist of one of the French Laundry’s (Thomas Keller) signature dishes; namely his “Sabayon of Pearl Tapioca with Oysters and Osetra Caviar”. The “Scandinavian twist” is that I substituted the Osetra Caviar (present in the original dish) with Kalix löjrom (whitefish roe).

From Haparanda’s northern islands to just south of Piteå, the enormous flow of fresh water from the mighty rivers of Swedish Lapland has created the world’s largest brackish water archipelago. Here, and only here, do vendace provide the exclusive, deep reddish-gold caviar, Kalixlöjrom, the red gold of the Gulf of Bothnia.

According to Richard Juhlin, the world’s most renowned champagne expert, a glass of champagne is the perfect supplement to Kalixlöjrom. This is also what we opted for, though we still had some Amour de Deutz left from the aperitif. 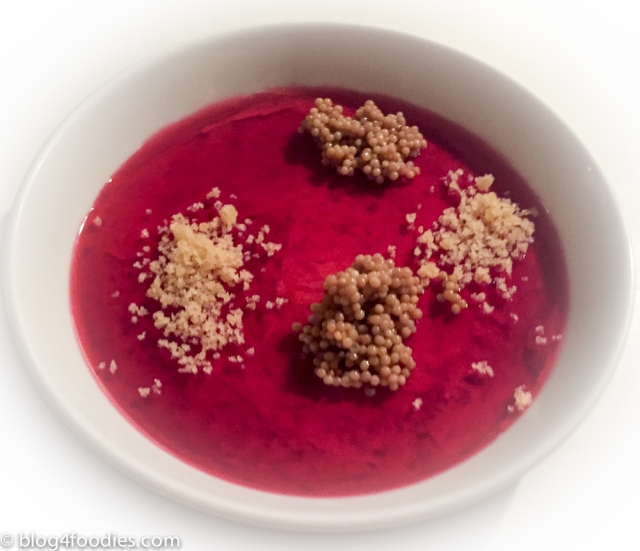 This Foie Gras parfait constitutes a layer of Foie Gras Ganache covered with another layer of ruby-hued pomegranate gelée, pickled mustard seed and bread crumbs. This is a recipe from Chefsteps.

One bite amuse-bouche blini with a Beet fluid gel, Crème fraîche, Trout roe and Chervil. A bad picture, otherwise it would have shown that the Beet fluid gel is having a beautiful, bright appearance. This fluid gel is “developed” by Chefsteps specifically for blinis in mind and the complete recipe can be found here.

Radishes in a pot: 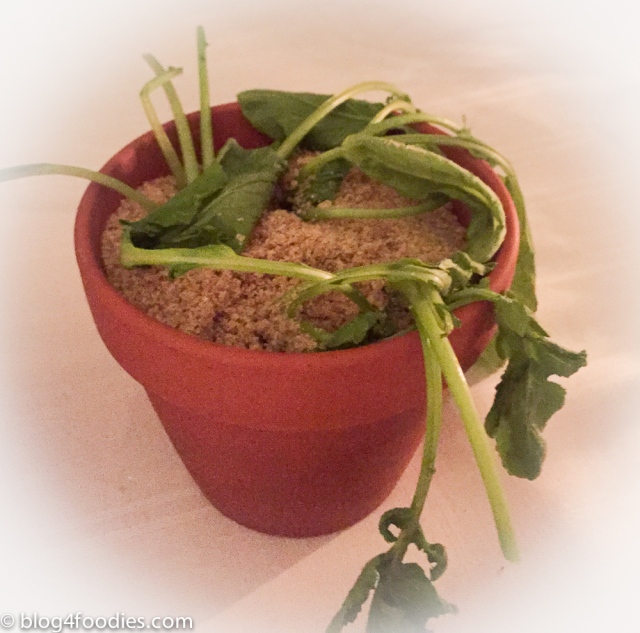 Radishes in a pot

For an amusement were you basically only shall have one small radish each from the pot, it is pretty much work though the dish contains radishes, parsley, chives, tarragon, chervil, shallots, sheep’s milk yogurt, capers, mayonnaise, food thickener (I used Lambda Carrageenan), wheat flour, malt flour, hazelnut flour, sugar, butter and salt… (recipe). 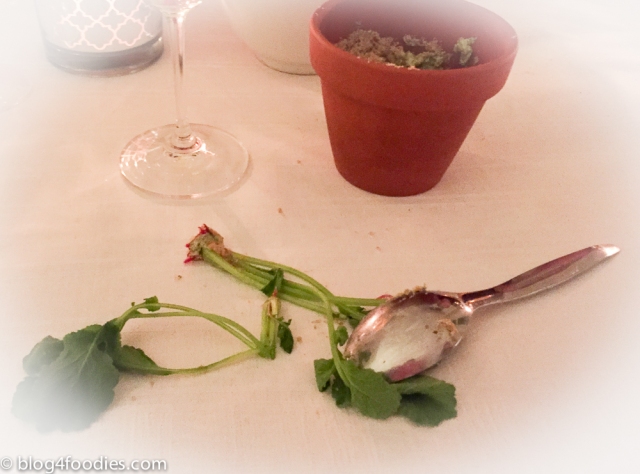 Worth mentioning: this is not just a “fun” dish but also a very tasty one! 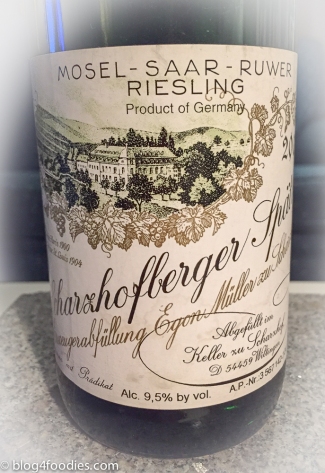 Paired with an Egon Müller Scharzhofberger Riesling Spätlese from 2003. 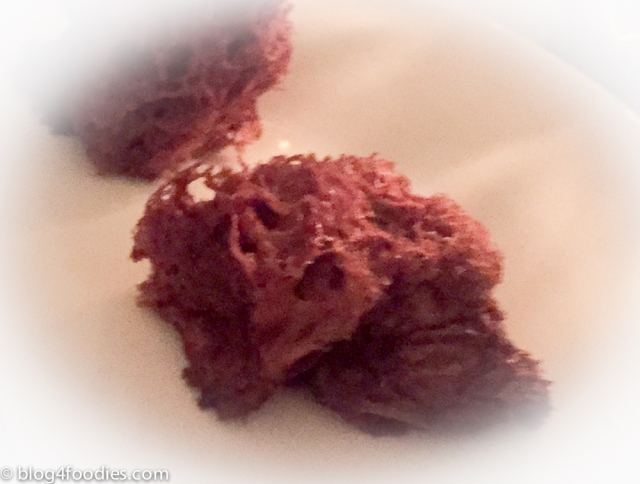 A refresher of orange juice prepared in a “cryo bowl” with Liquid Nitrogen (LN2) and this to get a fine (read: small ice crystals) sorbet like texture. 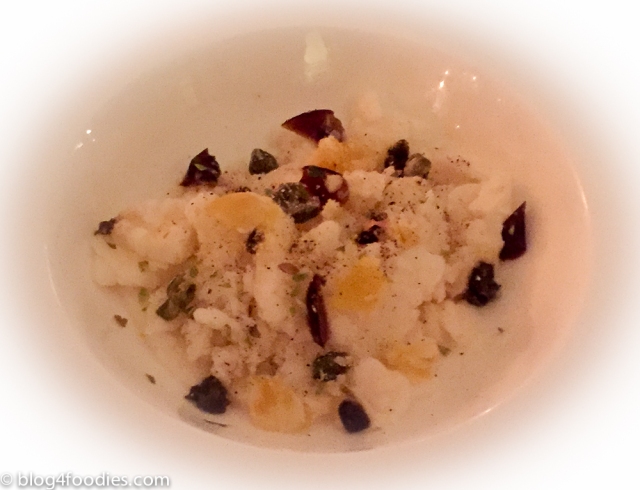 Granita (in Italian also granita siciliana) is a semi-frozen dessert made from sugar, water and various flavorings. Originally from Sicily, it is offered all over Italy in somewhat different forms.

This starter is an impersonation of a dish all of us (attending this New Years Eve dinner) had at Osteria Francescana last fall. It sets a tone with an intense taste of almonds, bits of candied bergamot, capers and coffee. Cold, delicate, original and very good!

Paired with my favorite Italian Franciacorta: Ca’ Del Bosco – Cuvée Annamaria Clementi. This 2001 vintage, that I have had before, was however having some kind of off-flavor that initially disturbed me. However, after some time, it luckily improved.

However, an even better match was the previously served Scharzhofberger Riesling Spätlese that really worked great with this dish. 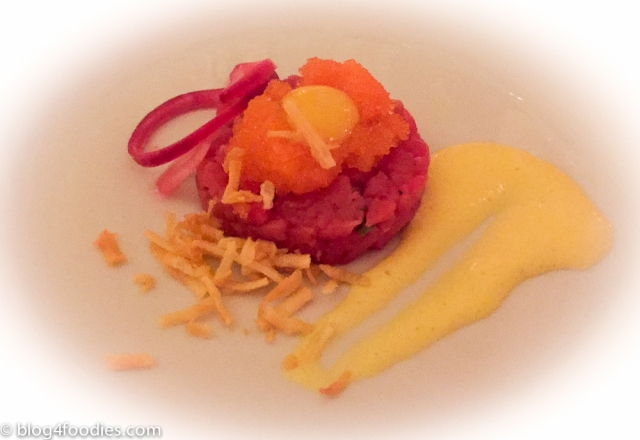 Steak tartare with quail egg, fried grated artichoke, Kalixlöjrom (whitefish roe) and an oyster reduction. Served together with a beer and a snaps (shot) of rosemary and thyme.

Maybe not the best looking dish this evening (especially not on this picture), but for sure very tasty! We used a homogenizer to get a really smooth Foie Gras soup.

Pike-perch with asparagus puree and beurre blanc. The fish was tough when you cut it, but at the same time almost melted in your mouth and this I found a bit strange.

Paired with one of my favorite still Italian white wines: Bellavista Vigna Uccellanda – Bianco Curtefranca, Vintage 2009. This wine is made from grapes from the vineyard known as Uccellanda, sown exclusively with Chardonnay grapes and located on one of the most luminous and sun-drenched slopes in the Franciacorta area. From here one can appreciate the entire moraine basin of the Iseo Lake, mostly responsible for the distinctive character of this land within the general array of Italian lands given over to winemaking.

Pork Cheek with scallop and artichoke: 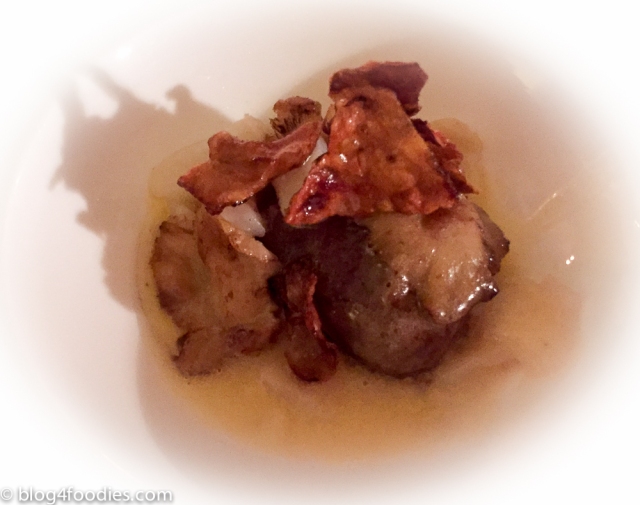 Pork Cheek with scallop and artichoke 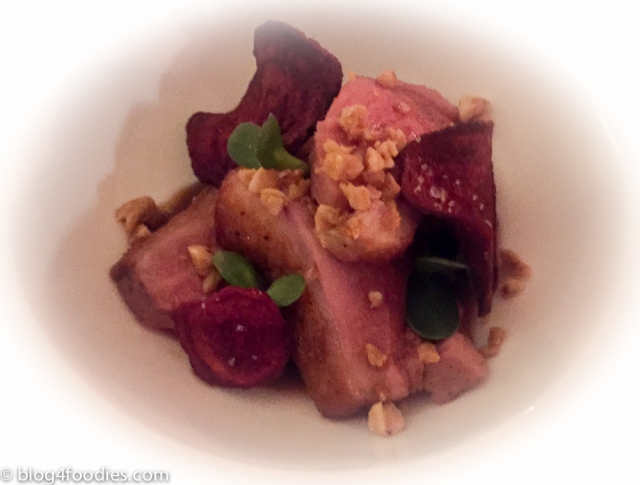 This tasty dish of duck was paired with a 1993 E. Guigal La Landonne. Good, but I was expecting a little bit more from this wine, though it is considered to be one of the very best syrah’s.

Quail breast with a cheddar and broccoli sauce: 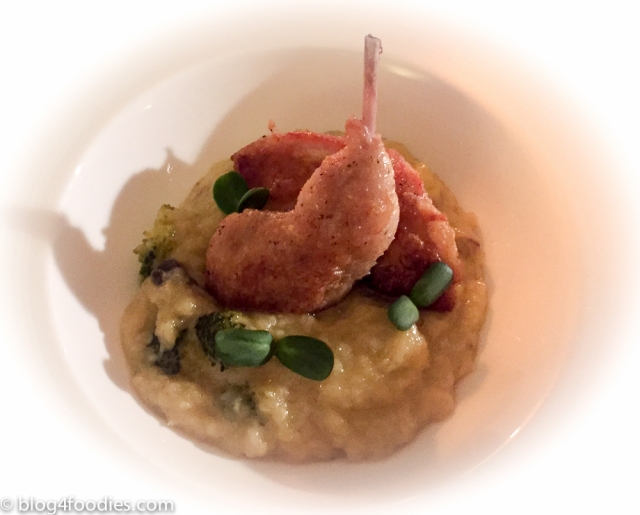 Quail breast with a cheddar and broccoli sauce

I really like quail and it worked really good with the cheddar and broccoli sauce.

Paired with a 2011 Montes Folly which is a 100% Syrah from Chile. Montes Folly grapes are grown on the steepest, highest slopes of the Finca de Apalta estate, in the Apalta Valley, where the incline is greater than 45 degrees. At less than 4 tonnes per hectare, yields are extremely low; grapes and clusters are much smaller and thus more concentrated than those from the vineyard´s lower slopes. True to terroir, fermentation is triggered and completed by the grapes’ natural wild yeasts. The wine is aged for 18 months in 100% new French oak barrels. There is no fining and only one very light filtration before bottling. Production is limited to just 9,000 bottles.

I am usually not that keen on wines from Chile and the ones I prefer most are usually Cabernet Sauvignons. That said, this Syrah wine from Chile was one of my favorites this dinner. 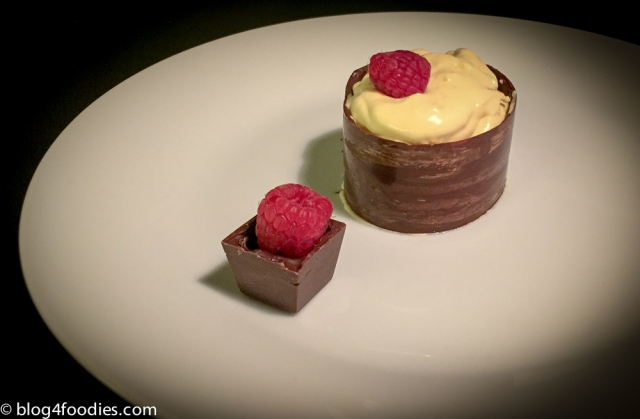 We opened a sweet Sauternes for the desserts, namely a 1982 Château Suduiraut.

Those spheres were made with the help of a balloon that was filled with a liquid of a raspberry “broth” (recipe) and water (I needed to dilute the raspberry broth with water for several reasons; first to be able to fill the balloon by using the water tap and secondly it was also easier to get a good even frozen sphere by having a higher concentration of water). After the balloon was filled with the liquid I inflated it with air to the desired volume and tied it. Then I rolled the inflated balloon in a bowl of Liquid Nitrogen (LN2) so that liquid spread evenly on the inner surface of the balloon and at the same time froze. When the liquid was solidly frozen inside the balloon, it was taken out of the LN2 bath and I then very gently used a butane torch to heat the plastic of the balloon to be able to remove that from the liquid hollow sphere. After the balloon was removed, I once again rolled the sphere in the LN2. Finished for serving or storage in the fridge… 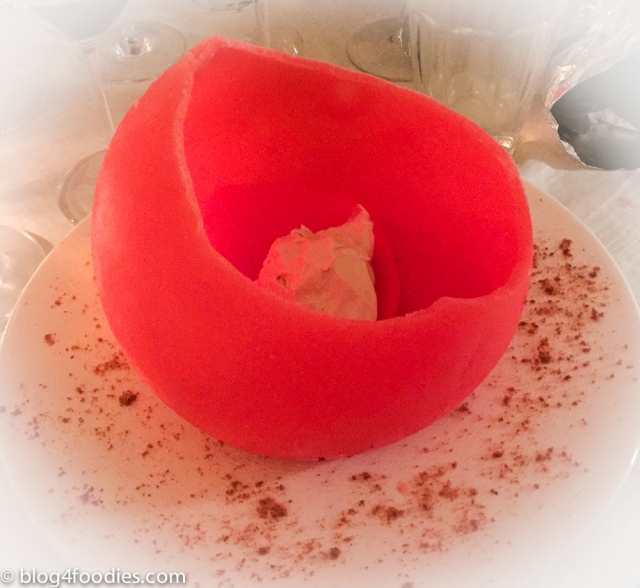 At service, the balloon was first served alone; to be cracked… After it was split open, a scoop of vanilla ice cream was added. An egg-free vanilla ice cream recipe from Chefsteps was used (recipe). A very high quality Tahitian vanilla bean was used for the ice cream.

We were really full at this time of the dinner but even this dessert was really good (but very powerful).

The cheeses were paired with:

When the clock was about six in the morning, we were thoroughly satisfied after our 16-hour food marathon. Consequently, my home-made pralines (which took me many hours to prepare) was left uneaten …

The best dinner I have eaten at home, ever! The wines were good but last New Year’s Eve wines were even better but this is just a small note in the context. However, we put down extremely hard work, time and money at this dinner and in light of this, I will never complain about the menu prices at a high-class restaurant and this is “good” then I intend to visit many more such in 2015 …