Every New Year’s Eve, since some years back now, I together with some other food- and wine interested friends meet up to do some home cooking.

The formula is in principle always the same:

Bonus dishes and wines are of course always more than welcomed…

This year we were five people attending and this is what we had:

The Salma brand/company (www.salma.no) provides among the best salmons I have tasted. A new product from them are the cold smoked salmon (Salmo salar) that I used for this little amusement together with an avocado espuma and Finnish sturgeon caviar.

This was matched with Krug Grand Cuvée 164 Edition. The 164 edition is having the 2008 vintage (i.e. a very good vintage in Champagne) as a base and being acclaimed by many renowned wine critics. Consequently, I had high expectations though this was the first time I had the 164 eme, but none of us were impressed by this wine. Maybe it is too early to drink, but I was on the other hand not identifying any high acidity (which I expected).

This is originally a ceviche dish, but I pan fried the scallops quickly. But apart from that, everything is else was uncooked. This was not a typical New Year’s dish, but I thought it was fresh and thought that the Krug GC 164 eme should work good with it (but, as described above, it was atypical). 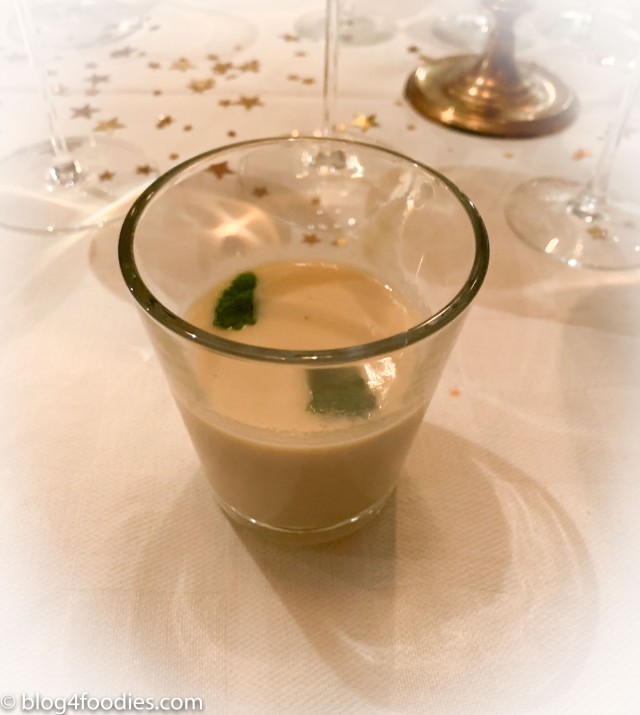 The soup was based on a Swiss cream (the same cow as Grand Affinage if I remember correctly) and a vegetable broth. Also, parmesan cheese and lemon balm on top. Served with three different Champagnes:

The Billecart-Salmon was excellent and maybe the best wine of the evening (maybe, though I may hold the 1996 Comtes, served in the next dish, a notch higher).

The Krug 2000 was a little bit anonymous and it took quite some time before I  was able to identify the characteristic gunpowder aroma. 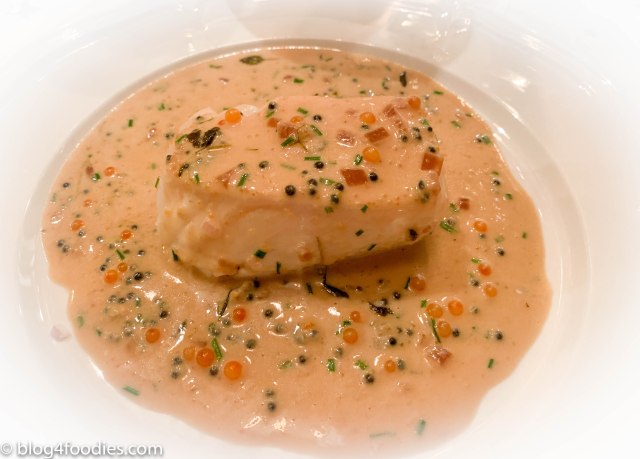 I followed a recipe from Tommy Myllemäki, who apart from being a very good chef in general (e.g. both a 2nd and a 3rd place in Bocuse d’Or) is especially good when it comes to sauces.

Even though the poached halibut was good, it was the sauce that made this dish. The recipe calls for Turbot, but I was not able to source that for New Year’s Eve, but I think Halibut is a very good fish as well.

Kalix Löjrom (used in the white wine sauce together with salmon roe and the Finnish sturgeon caviar) is the designation of the roe of the small salmonid fish species vendace (Coregonus albula), harvested specifically from the Bothnian Bay archipelago of the Baltic Sea in northern Sweden. Since 2010 it has a status of Protected Designation of Origin (PDO) issued by the European Union, and is the only Swedish product with the PDO status. Kalix is a locality in Norrbotten County. The roe harvest normally starts late September and continues until the vendace are ready for spawning around late October.

For various reasons the roe has a more orange or red color than most vendace roe and the grains have a mild taste. Kalix Löjrom is often served at royal dinners and it is common on the Nobel prize banquets. Kalix Löjrom means literally “Kalix vendace roe”. It is marketed as “Caviar of Kalix”.

This dish was matched with 1996 Taittinger Comtes de Champagne Blanc de Blancs Brut, Champagne. One of the two best wines this evening according to me, but a little bit atypical and more elegant than normally. 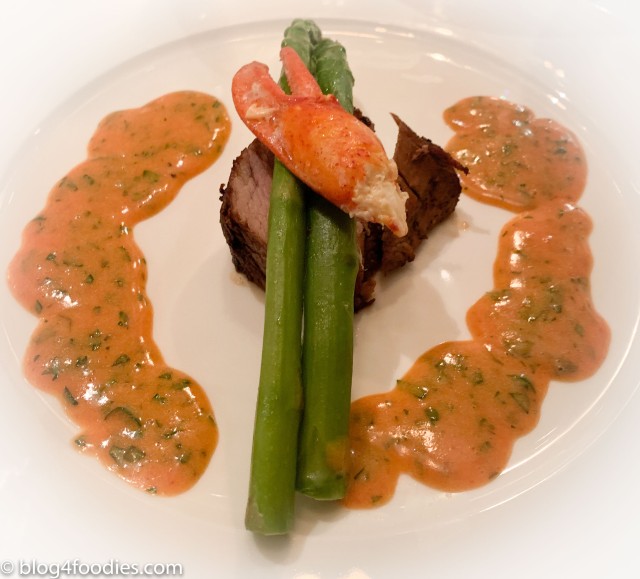 The dish was first served on September 18, 1897 at the Grand Hotel in Stockholm in connection with the Oscar II’s 25th anniversary as a regent. The creator behind the court was the Frenchman Paul Edmond Malaine. His plate consisted of calf fillet on a mirror of choron sauce formed an O. A truffled lobster tail became the crown of the work and a couple of extra thick white asparagus bars all over symbolized the Roman number two (II). This combined formed the king’s crowned monogram.

Clos Saint-Denis is a grand cru vineyard in Morey-Saint-Denis, in Burgundy’s Côte de Nuits. It is located on the mid-slope of the Cote d’Or escarpment, immediately north of Morey-Saint-Denis village, and covers just 6 hectares (15 acres) of land. Usually more aromatic and delicate than the wines from the neighboring Clos de la Roche Grand Cru vineyard. The site’s name can be traced back to the 11th Century and refers to the Collegiale de Saint-Denis de Vergy; a religious order founded in 1023 that built its church on the clos site. The clos was constructed as a vineyard and has remained one ever since.

For me, this was yet another atypical wine for its type (just like the Krug GC and the 96 Comtes) and I could not even guess it was a Bourgogne… That being said, I still liked the wine.

As a bonus wine (for one not responsible for the dish) we also had a 2013 Freemark Abbey Merlot from Napa Valley. One of the best Napa wines I have had is a Freemark Abbey Cabernet Sauvignon (‘Bosche’ ?) from 2001, but this Merlot was not on pair with that one; unfortunately… 😉

Next up was a tasty cheese salad.

I had Riussec in favor of the d’Yquem (even though the latter one, in the 2001 vintage, is one of the best wines I have had, all categories included). 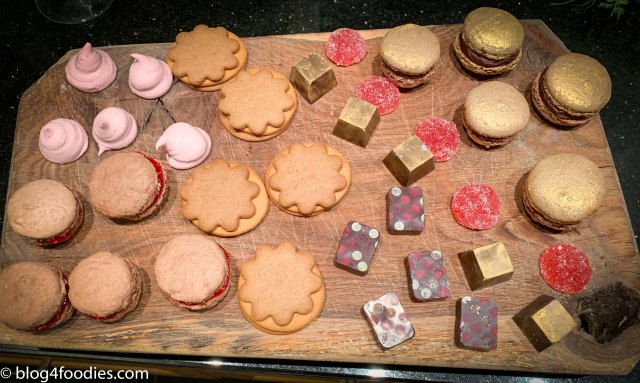 The Petit Fours were my responsibility and it easily was the most time-consuming part I did for this dinner. One reason was the macarons, that took a little bit more time than expected. However, it was the chocolate part that, by margin, took the longest time to do. The main cause for this was that I did the chocolate regarding the bean-to-bar concept, which mean I started with raw (Criollo) cacao beans: 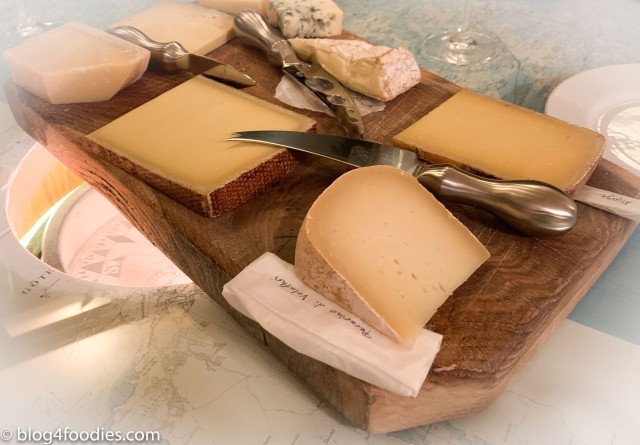 Summary:
Our “less ambitious” New Year’s Eve dinner was successful. Still, I think we have had even better food most of the previous New Year’s, but this year was still “respectable” and consistent.

I think the same goes for the wine; respectable but we have had even better bottles previous celebrations.

Personally, I easily put in as much work in advance (e.g. prepping at home), as any of the previous years. However, I could this New Year’s Eve enjoy and spend more time with my friends, which in the end is the very most important thing a day like this!