Surrounded by the Les Trois Vallées at 2300 meters; snowy slopes frame Val Thorens in the French Alps. The 2-star restaurant Jean Sulpice is located in the L’OXALYS Residence (http://www.residence-oxalys.com/en/) and is the highest located Guide Michelin restaurant in Europe (world?).

The restaurant is lead by chef Jean Sulpice (i.e. which also is the name of the restaurant…) together with his wife Magali and the sommelier Lorianne Brun.

Here you can experience extraordinary ingredients from Savoie with different textures and a harmony of flavors. Much of what Jean Sulpice serves is locally sourced, thanks to a network of local producers.

My main reason for visiting restaurant Jean Sulpice was a ski trip together with some friends where we were staying in Val Thorens.

There are three different tasting menus to chose from and we opted for the FULL SLOPE menu (a carte blanche menu):

As for the aperitif, I asked to have a local Savoie wine and we were served a local sparkling wine, which we all liked. Always both interesting and educating to taste good sparkling wines from the lesser well-known areas.

The first Amuse-Bouche were some nice crackers. 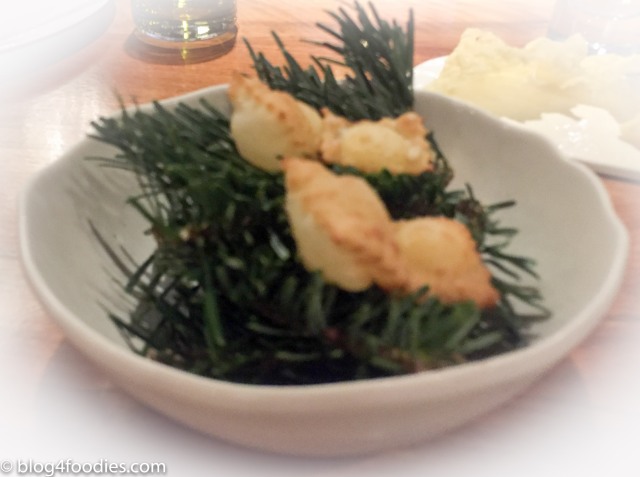 Next amusement was a little tasty cheese puff. 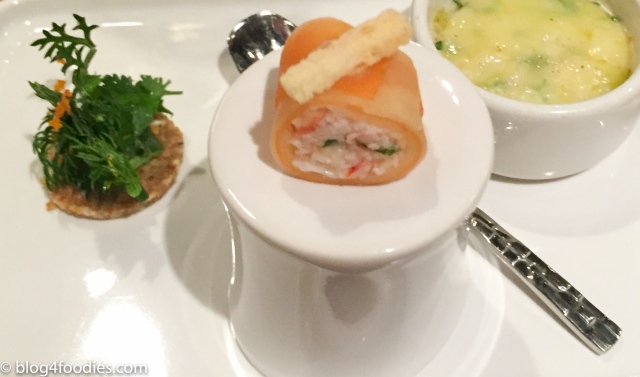 Third Amuse-Bouches serving contained three small amusements were I only remember the one containing lobster and litchi (or lychee: a tropical and subtropical fruit tree native to the Guangdong and Fujian provinces of China, but now cultivated in many parts of the world). Maybe not so local to Savoie… 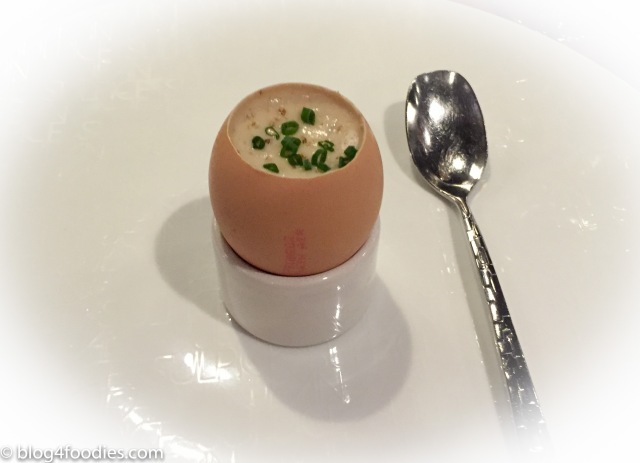 Next amusement was an egg together with herbs and mushrooms. Tasty!

Next amusement was nettles together with pineapple. Not everyone in the group like the pineapple combined with the nettles, but personally I think it worked. 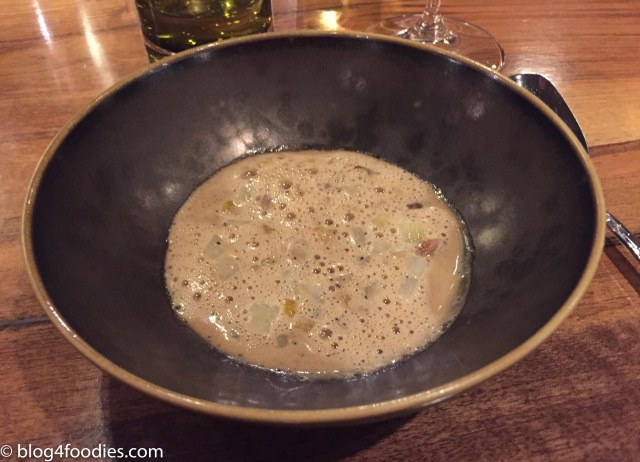 The first dish of the menu was a lovely vegetarian soup made of winter herbs. One of my favorites this dinner.

We decided to stay in the Savoie region on the topics of wine and as a novice in this part of France, we put ourselves in the hands of the sommelier. We got a very good white wine made of the grape Marsanne (I think) but the grape is called something else in the Savoie area and I do not remember neither that, nor the name of the wine.

The oyster dish was perfect for “oyster beginners” though it contained very little of the typical taste of those briny bivalves. Ironically (and surprisingly…) a couple of the people in the group had barely tasted oysters before but had no (major…) problem with this dish. 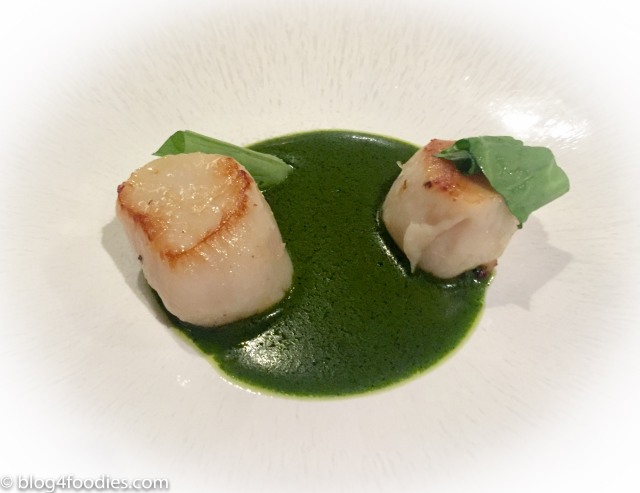 This was a favorite for all of us. I have personally had much better scallops (e.g. at Frantzén) but the accompanying (green) sauce was very good and one of the absolute highlights this dinner. 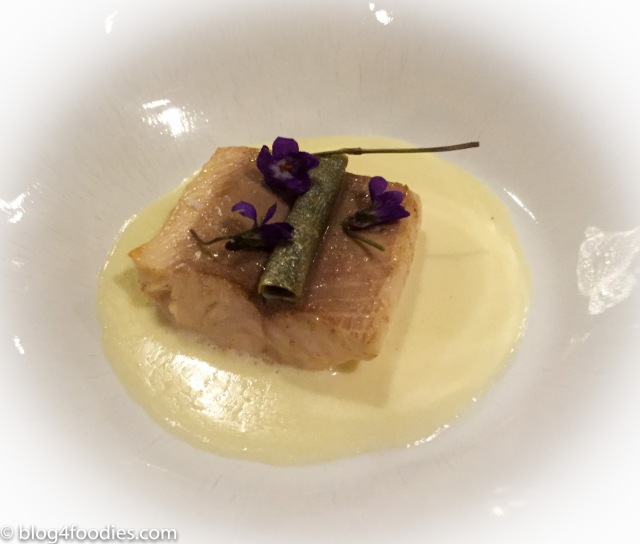 I think the fish was a locally sourced trout. The fish was assisted with a flower infused sauce of Viola. I think I was the only one that appreciated the sauce; the other thought it was constrainedly.

Everyone likes the lamb and I was the only one that maybe had preferred to have the meat even more pink.

Here I noticed a small crack in the sommelier work. This though the lamb arrived prior to our red (new) wine. Also, when the sommelier noticed this, he had also forgot to aerate the wine, which I think was a big mistake though the wine was young. That said, I liked the wine, but my friends were not that keen. 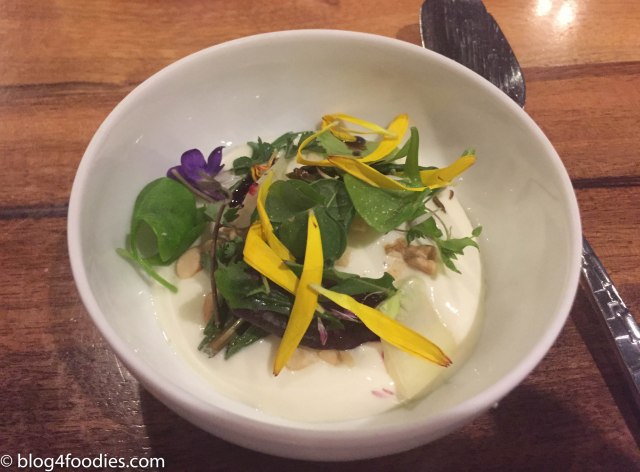 Here we had the option to either go with the cheese dish of Beaufort and herbs or a trolley of Savoie cheeses. All opted for the Beaufort dish, which I personally enjoyed a lot. The herbs complemented the cheese in a very compelling way. A theme appeared now, namely that nuts were common in many dishes.

The first dessert was a tart dish made of wild celery, ice cream (of ?), nuts and lemon.

The “apple” was actually a pear… You were supposed to crack the “apple” with your spoon to be able to eat this second dessert. Strangely enough, given the origin of the people attending this dinner; a couple of the persons did not like licorice! Luckily, I was not one those and I like the combination of pear, honey and licorice. 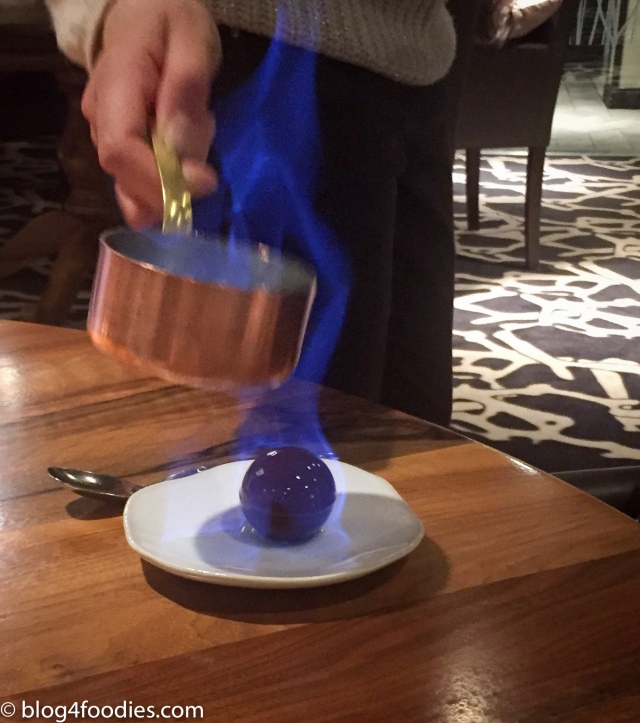 The only petit four accompanying the coffee/tea consisted of a chocolate ball that was melted with the help of burning Green Chartreuse. I am not always keen of the proven combination of chocolate and spirit, but maybe I will grow up some day…

In summary: Restaurant Jean Sulpice is operated in a relaxed and welcoming environment. For me this dinner was a much welcomed break from the highly ordinary food we had all other days.

None of my friends had previously been to a 2-stars Guide Michelin restaurant and it seems that they, for most of the time, enjoyed it (apart from when the bill arrived…), but I am not sure if they will visit another one next week… I personally booked the 3-stars restaurant Geranium in Copenhagen the very same day I got back from this ski trip 😉

However, it is a good reminder that there is another side to dining; most of the time when we partake in a meal with friends, it is not about a desire for food, but a shared social experience that allows us to spend time with the people we like.