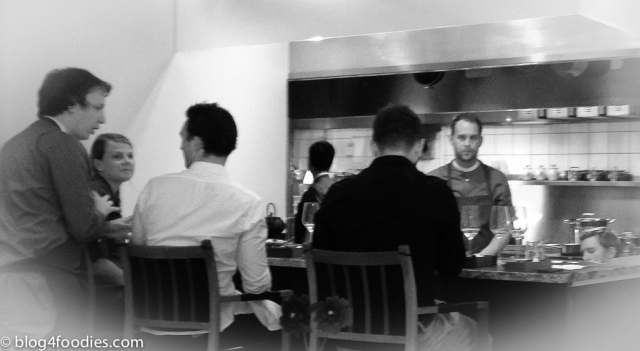 February 19 (2018): Frantzén finally got its third star, which also means that it is the very first restaurant in Sweden having achieved this.

Note: the restaurant is relocating (since my visit) to Klara Norra Kyrkogata 26, in downtown Stockholm. With three floors plus a terrace, the new place has undergone a complete reconstruction since the takeover. Despite the surface area now being five times as large, as the previous premises (where I had dinner in my post below), the number of guests it can seat is still the same, i.e. 23 persons.

Restaurant Frantzén (previously named Frantzén/Lindeberg, before the departure of the co-founder and pastry chef Daniel Lindeberg in April 2013) is probably the most celebrated and sought for restaurant in Sweden for the time being (maybe in close “competition” with Fäviken Magasinet). But also from a more international perspective is the restaurant one of the most “admired” with a number 12 on the World’s 50 Best restaurants list (2013).

Frantzén is definitely one of the reasons for the international interest and love of Scandinavian food. Noma is obviously another reason but at least my taste buds favor Frantzén but that’s another topic…

Björn Frantzén (head chef) and former business partner Daniel Lindeberg met in the late 1990s at the then 2-star restaurant Edsbacka Krog (Stockholm). They were then both working in some of the very top restaurants in France (e.g. at L’Arpege under Alain Passard) and UK before they returned to Stockholm and jointly opened the restaurant Frantzén/Lindeberg in 2008 in Gamla Stan (old town of Stockholm). A year later they got their first star and in 2010 its second. Many have speculated that Frantzén should (or at least could…) be the first 3-star restaurant in Scandinavia, but it seems like it is impossible for any restaurant in Scandinavia to gain 3 stars. I wonder what ratings restaurants like Noma, Maemo and Frantzén should have had if they were located in France…

Opening hours are Tuesday to Friday from 18:00 and Saturdays from 14:30. A menu of currently 12 servings (before 17…) is the only option (even on the early Saturday servings) and the price is 2200 SEK (about 255€) for the tasting menu only. A vine-pairing package is available for another 1300 SEK (~150€) or 1600 SEK (~185€) so the dinner is more expensive than most 3-star restaurants I have visited and I think that the mark-ups for the wines in general are noteworthy high.

The restaurant emphases seasonal produce and also have two dedicated gardens that produce most of the vegetables used in the restaurant. Other ingredients used (e.g. fish and meat) are all of the highest possible quality, a result of a dedicated collaboration with the restaurant’s providers (e.g. iki jme cared fish from the West Coast of Sweden and top notch scallops from Norway). The aim is to use Swedish products where appropriate but this not a “law” and this is something I appreciate (i.e. to aim but not insist when there are better alternatives).

After Lindberg left there have been some slight changes and one is that Björn Frantzén had got quite some (more…) inspirations from Japan, which now is somewhat, reflected in the dinner and menu. One example is that the tempo for the dinner will be higher (now roughly 2,5 hours) but also some food itself has got a touch of Japan (which honestly also was the case before the departure of Lindeberg).

This is what we had: 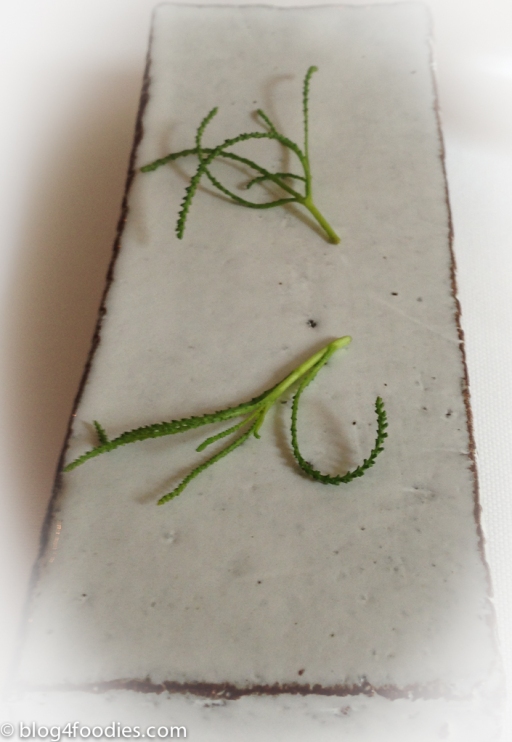 The “canapé” consisted of just a herb, but a very delicious one!

To be eaten from right, starting with a pomegranate- and galangal root “macaron” (i.e. a meringue) with creamy chicken liver. This was followed by a ”Vichyssoise” with truffle. Next up (second from the left in the picture above) was white moss… Finally (leftmost) an arrangement of different parts from the pig. 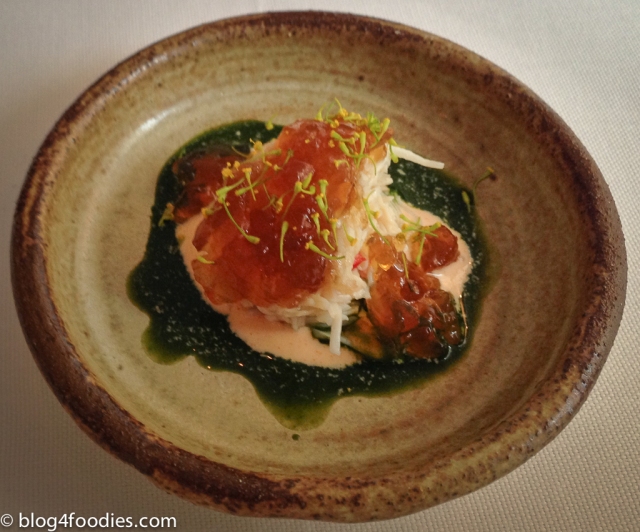 Crayfish poached in dill and beer

In Sweden it is crayfish season in August and this theme was picked up by the restaurant who served a crayfish cooked in beer and dill. Very good! 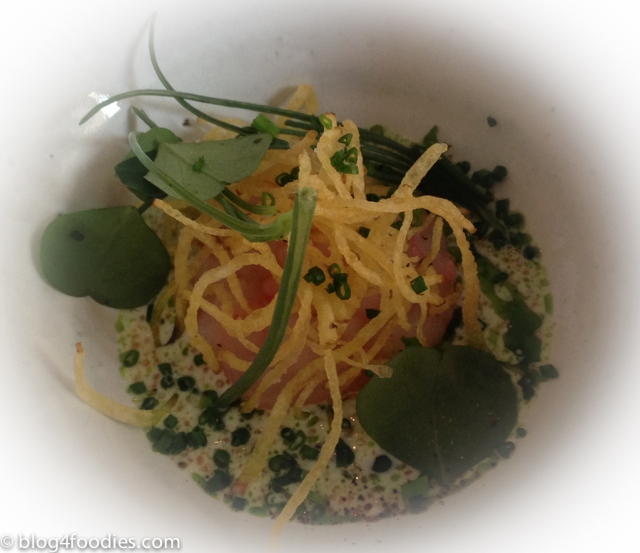 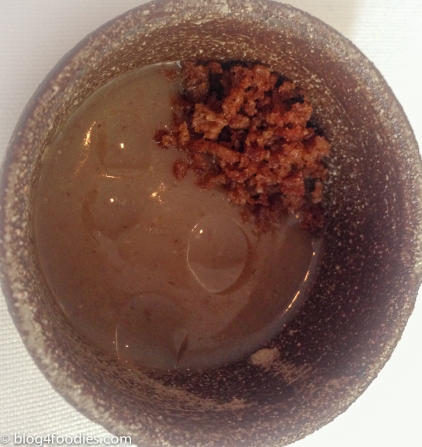 Frantzén has stopped serving bread and the reason is that too many guests gets glut by eating too much bread during the dinner and therefore cannot fully appreciate all meals served. Instead they are now serving a kind of deconstruction “bread” consisting of for instance a sour dough culture. 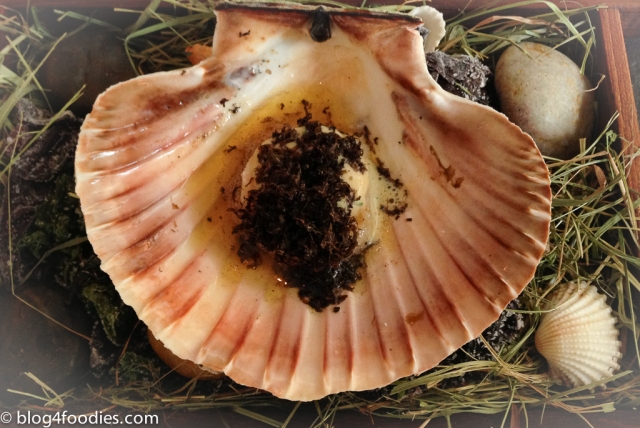 Scallop #1: a scallop from Hitra in Norway is grilled over open fire in its own shell. On top was a cream made of eggs from Iberico goose together with some truffles. I understand this a signature dish! 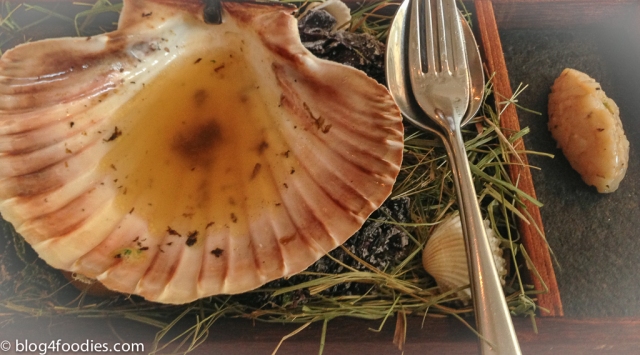 Scallop #2: the leftover broth from the scallop #1 was now used together with Frantzén’s own version of a dashi (poured into the shell). The “dashi” was made of chanterelles, dried scallops and dried seaweed. To this you had a scallop tartar (shown to the right in the picture above). 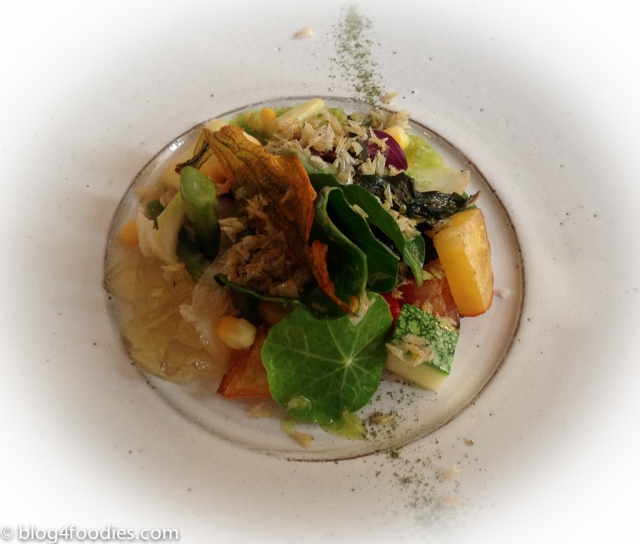 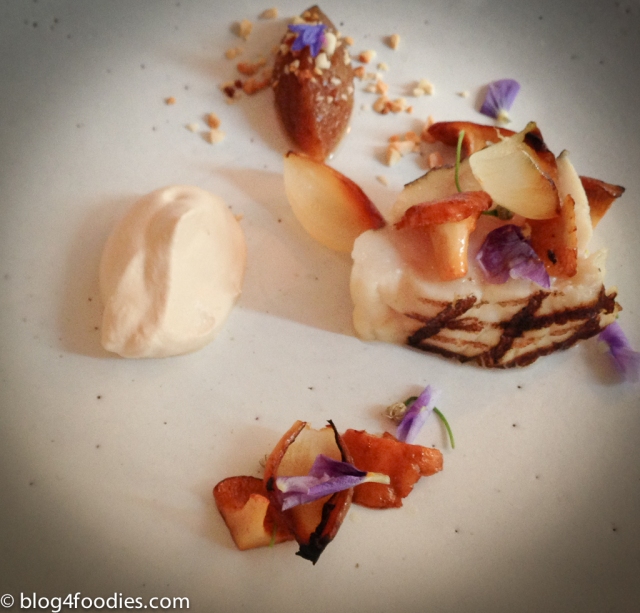 Monkfish is one of my favorite fishes and this was one of the best I have had (and I had it at both Rafa´s and Compartir just about a month before this dinner that both served delicious monkfish).

The monkfish was prepared in a combi oven set to 60C until the core temperature of the fish reached 38C. Apart from the easy identifiably chanterelles and caramelized onions, I think at least licorice was present but I am not completely sure about the rest… 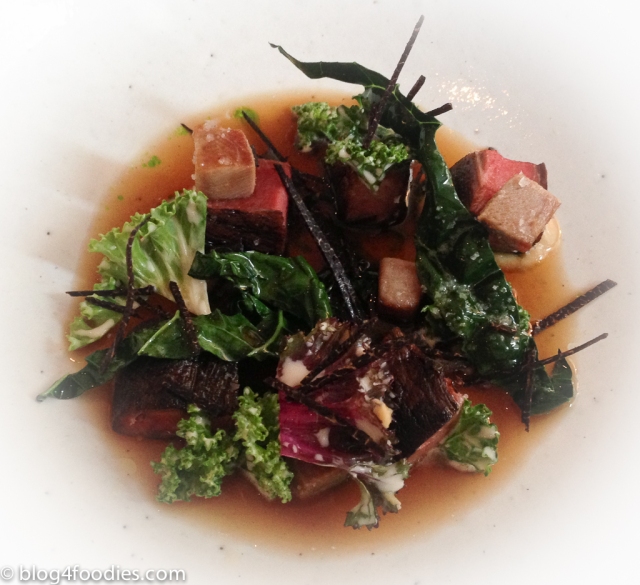 Hot pot refers to several East Asian variations of stew, consisting of a simmering metal pot of stock at the center of the dining table. While the hot pot is kept simmering, ingredients are placed into the pot and are cooked at the table (not done at the dining table at Frantzén). The Chinese hot pot has a history of more than 1000 years and appears to have originated in Mongolia. Typical hot pot dishes include thinly sliced meat, leaf vegetables, mushrooms, wontons, egg dumplings, and seafood. Vegetables, fish and meat should be fresh. The cooked food is usually eaten with a dipping sauce (but this was not present in the served Frantzén interpretation of the hot pot). 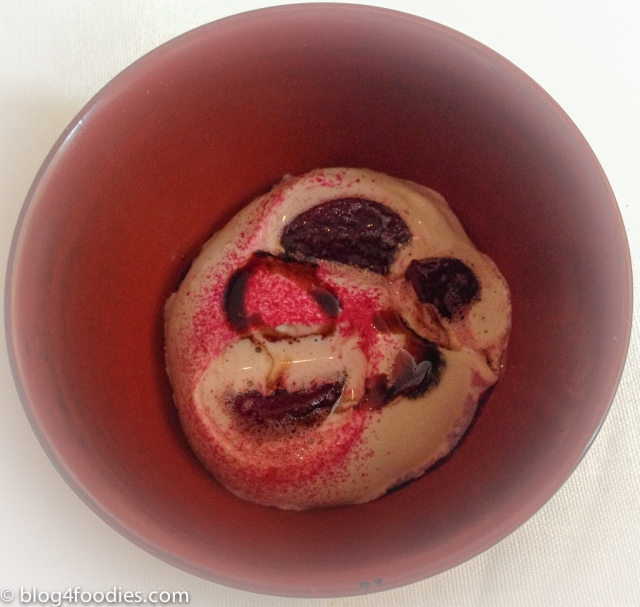 The beetroot based dessert was very good! 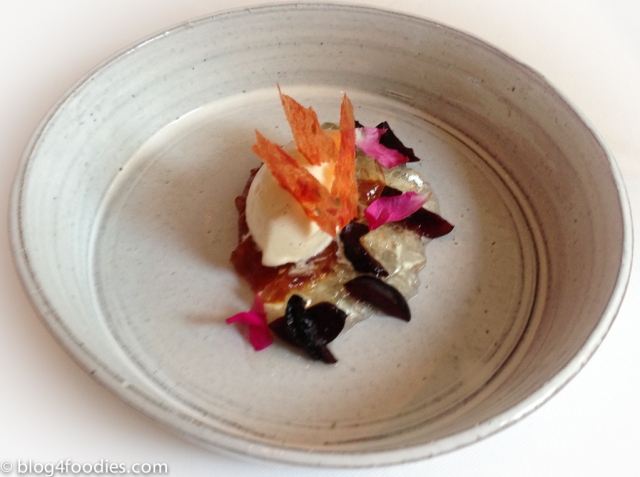 For me this dessert (above) was the least interesting meal this serving and I cannot remember its ingredients (the menu had only eight words describing the full menu, which is in sharp contrast to what I previously have seen from the restaurant, which is little bit sad though I do not like to sit and take notes during the dinner). 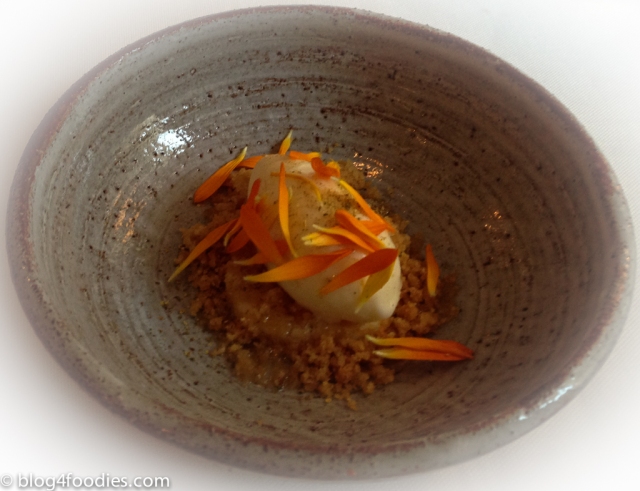 This dessert (above) had a touch of smokiness that I liked a lot. 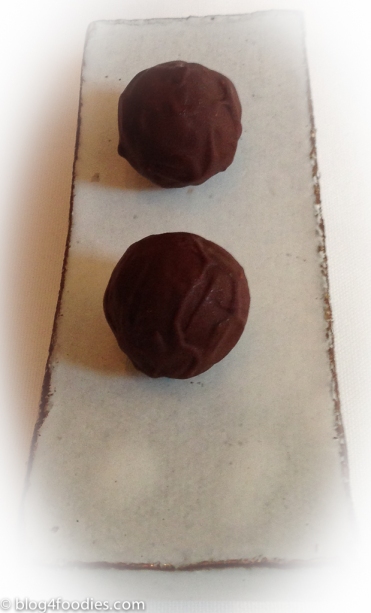 Good, but here I actually expected to get a little bit more “excitement” than just one small nibble as the petit four to the coffee (the picture above was the total petit four for two persons).

The coffee served was a Kenyan variety, from the Swedish coffee roaster Johan & Nyström, and was brewed on a chemex brewer.

To summarize: excellent high quality food with a strong focus on good flavor combinations. Almost every single dish was excellent and this was one of the best dinners I ever had. Unpretentious in a tranquil setting together with good service adds points to the dinner’s total experience.  Extreme mark-ups for the wine and you can actually eat and drink at two 3-stars restaurants in Spain for the same price… That said, I consider Frantzén one of the best restaurants and a must to visit!