La Pergola is the only restaurant with three Guide Michelin stars in Rome and is not only considered to be the best restaurant in the Eternal City but also one of the very best in Italy.

Located on the top floor of the Rome Cavalieri Hotel (a luxury 5-stars Waldorf Astoria Hotel owned by Hilton), which in turn is situated on one of the hills (i.e. Monte Mario) surrounding Rome, provides for a stunning view over the city and the close by Dome of St Peter’s from the dining table.

German Heinz Beck is the head chef of La Pergola and considered more “Italian” than many of his colleagues. The food served at Pergola is creative Roman and Mediterranean cuisine.

Pergola opened in 1994 and was awarded its third Guide Michelin star in 2005 (kept since then). Prior to Pergola, Heinz Beck trained at Residenz Heinz Winkler.

Like many other “high profile” chefs, Heinz Becks runs a small empire of restaurants around the world (Apsleys in London, Social in Dubai, Gusto in Algarve, Cafè Les Paillotes in Pescra and Heinz Beck Seasons at Ristorante Castello di Fighine) but Pergola in Rome is the flagship. And when we had dinner at Pergola, Heinz Beck was opening a new restaurant in Tokyo…

The wine cellar of La Pergola houses over 60,000 bottles and the water menu presently has 29 choices.

Pergola has one tasting menu, a nine-course option named “Gourmet Menu” for €220 (you have the choice to remove the cheese selection and one other dish and then the menu price is €195). Apart from the tasting menu, you could also go à la Carte.

Also for a limited time, to celebrate La Pergola’s 20 year jubilee, Heinz Beck has created a unique 12-course menu showcasing the milestones of his culinary art. Available in a limited edition, “only” 999 guests will be able to enjoy this “20 Years Menu”.

We opted for the 20 Years Menu for 350 € per person (wine of course not included, but disappointingly neither no cheese selection).

At the start of the dinner we were offered butter, some excellent olive oil from Lazio and bread of four different kinds (we liked the butter-bread the best). But foremost we were offered to select salt from a wide variety of places, for instance from Peru, Iran, Hawaii, Norway and Australia (I do not remember all salts), and this was very interesting to sample.

A lovely looking dish (even more lovely prior to having the photo, though the dry ice underneath the dish created some “smog” when it has water poured over it, which cannot be seen though I did not want to take the photo when having the dish presented by the waiter), but unfortunately not as tasty as it looks. From my taste buds, it’s a little bit surprising that this dish is on the 20 years menu (its also on present on the Gourmet Menu). However, I know of people enjoying this dish a lot and the subtle sweetness of the pomegranate married well with the amberjack Carpaccio, which had a nice aroma and slight touch of acidity from the balsamic vinegar, overall resulting in a balanced dish.

“Frisella” with croûtons and red shrimps:

“Frisella” with croûtons and red shrimps

It seems like the kitchen has invested in a freeze-dryer and maybe used it a notch too much, when the texture of those dry/semi-dry ingredients occurred in several dishes during our menu. I think this dish was good but far from outstanding. 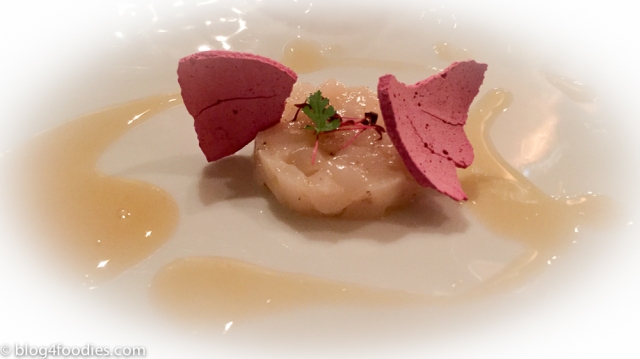 A nice tasting scallop but I did not like the texture of the red beef shell since it was soft and almost rubbery. 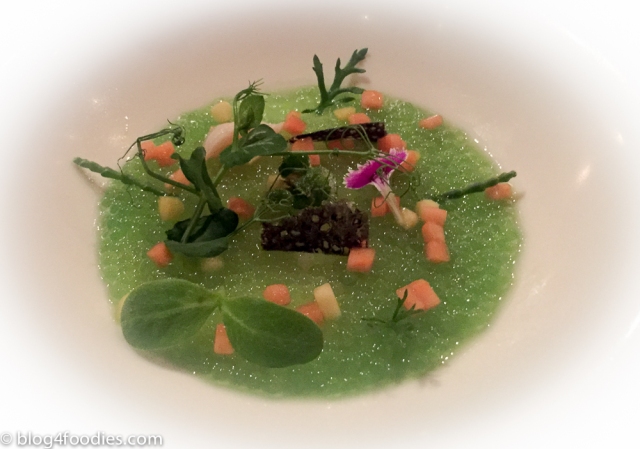 A beautiful dish with tapioca pearls cooked with an herb consommé with clams, scampi and avocado. That said, I am not that keen of tapioca pearls and its texture. 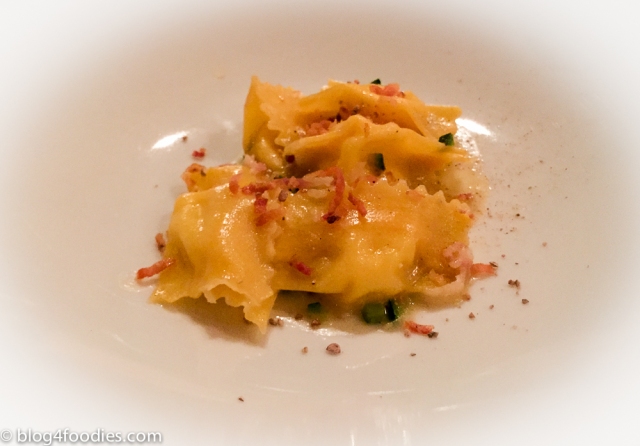 Fagottelli “La Pergola” is the most famous dish created by Heinz Beck and served at La Pergola. The fagotelli, which are little square parcels, are filled with a carbonara sauce (yolks, pecorino cheese, whipped cream, salt and white pepper), cooked and finished in the pan with some white wine, zucchini, veal stock and pecorino cheese. On the plate, some crispy bacon is added.

The pasta itself is made from the De Cecco brand (semolina flour) and rolled out so thin that you basically can see through it. It is an intriguing dish, nothing like ordinary spaghetti carbonara and is probably the best pasta I ever had.

Deep-fried zucchini flower with caviar on shellfish and saffron consommé:

A sweet, golden zucchini flower were coated with a zucchini-and-onion batter, deep-fried and served in a shellfish with saffron consommé. Garnished with tiny quail eggs and beluga caviar. One of the two “historical” dishes served this dinner and you could definitely understand why this is a classic!

The dried porcini, truffle and artichoke in this dish (“Woodland”) really married with the foie gras. Most of us, including me, really liked this dish.

An ossobuco (or osso buco) is a Milanese specialty of cross-cut veal shanks braised with vegetables, white wine and broth. It is often garnished with gremolata and traditionally served with risotto alla milanese.

The dish “Looking for ossobuco” on the La Pergola menu is a modern twist of the traditional osso buco and constitutes a beef tartare and a veal jelly (made by the help of a centrifuge to concentrate the flavors) that is served on crispy rice together with the traditional gremolata (here made on a reduction from garlic, lemon and parsley).

The tomato sauce served to the lamb was hands down the best I ever had!

12 boxes of petits fours… However, I do not understand why this was served prior to the desserts (and the coffee/tea). 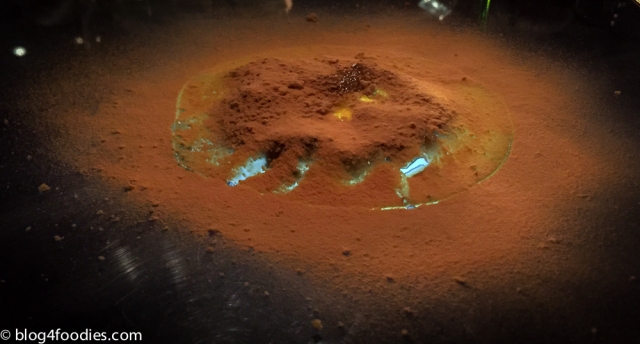 This second dessert was really good!

Chocolate to the coffee

The dinner ended with a bit of homemade chocolate to the coffee/tea (besides all the remaining petits fours that was put on the table just before the first dessert…).

We had the following wines during the dinner:

After my visit to the restaurant I read that Heinz Beck’s intention with the 20 Years Menu was a menu that looks to the future and includes only two of his “historical” dishes (i.e. the Zucchini Flowers and the Fagottelli La Pergola). The menu also includes some dishes Beck recently put on the menu and then some new additions that have never been on any La Pergola menu before. That way about a third of the 20 Years Menu has never have been on any previous menu. If I had known that in advance I would probably have opted for the Gourmet Menu, though that, for instance includes the “Grand Dessert” that I am very keen on trying but also that it contains dishes that are more “mature”.

Add that no cheese were served to the 20 Years Menu, its price tag (i.e. 350 €) and that Heinz Beck himself was not present in the restaurant (which is strange when he has made a name of never ever miss a serving at La Pergola, even though he runs numerous other restaurants), makes that I probably in hindsight would (should?) have opted for the regular Gourmet Menu instead.

That said, La Pergola is a solid 3-stars restaurant and I am very pleased with most of the dishes served (but not all…). The service was very good but at the same time friendly and certainly not as stiff as in some other “fine dining” restaurants.

The facilities are very luxurious but for me almost to the kitchy way, so even if I liked being in the restaurant, it’s so far from my taste you can get.

By the way, I was number 889 (of the 999 possible) that had the anniversary menu, so there are not that many opportunities left to have this “20 Years Menu”.

All this said; I can really recommend a visit to La Pergola which certainly is a world class restaurant in every perspective!