Food: modern Scandinavian fine dining
Address: Södra Vägen 32, 412 54 Gothenburg, Sweden
Phone Number: +46 (0)31 16 11 83
Website: www.linneaartrestaurant.se
Guide Michelin: No stars (elsewhere in Europe it would easily have had at least one…)
What I paid:  2500 SEK (that is about 275€ for their big tasting menu and exclusive wine-pairing together with a champagne as an aperitif)
Visited: November 26, 2013

Update: this restaurant is closed.

Restaurant Linnéa Art is a restaurant in Gothenburg (on the west coast of Sweden) that have been on my radar for many years but that I for some reason not managed to visit. A friend and a very good recent review in a newspaper finally got me there…

Linnéa Art has for several years been in the top league on the Swedish west coast but has never gained any recognition in Guide Michelin. I have said this many times before, namely that Guide Michelin has a very different yardstick in regards to how restaurants in the Nordic region of Europe (read Denmark, Norway and Sweden) are judged in comparison to other regions around the world. My opinion is that they are much tougher judged but also at the same time usually more expensive (at least when it comes to the wine mark ups).

The interior of the restaurant is developed together with some of the most famous glass artists in Sweden. Main reason for this is that Linnéa Art is owned by the NWG Group that among other companies own the world renown Swedish glass companies Orrefors and Kosta Boda.

Chef Edin Dzemat has worked at Noma for three years and you can definitely trace that in the food.

There are two tasting menus to choose from, one 4-course menu and a larger one named Edin Dzemat (the chefs name that is). We opted for the bigger one priced at 995 SEK. There were two wine pairing alternatives for this menu, one “ordinary” a 895 SEK and one exclusive for 1195 SEK. There is also a non-alcoholic beverage menu for 215 SEK. In regards to the wine we opted for the exclusive package.

We started the dinner with a champagne as an aperitif and the first nip was a chip on pork rind (served among some pine needles and berries).  The pork rind was first boiled, then dried and finally deep-fried and garnished (with an oyster emulsion). Very good and a perfect match to the champagne! 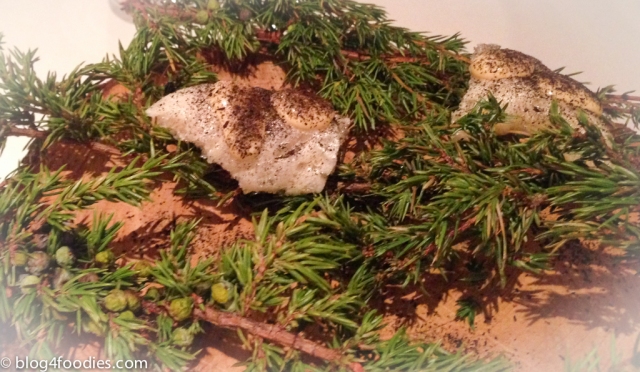 Next up was an amusement of lightly smoked trout roe, horseradish “snow” and a carrot purée (and ginger?). Again, very tasty!

We were then served an amusement of a sausage of duck liver and a purée of parsley root that was topped with some fried bread crumbs. Good! 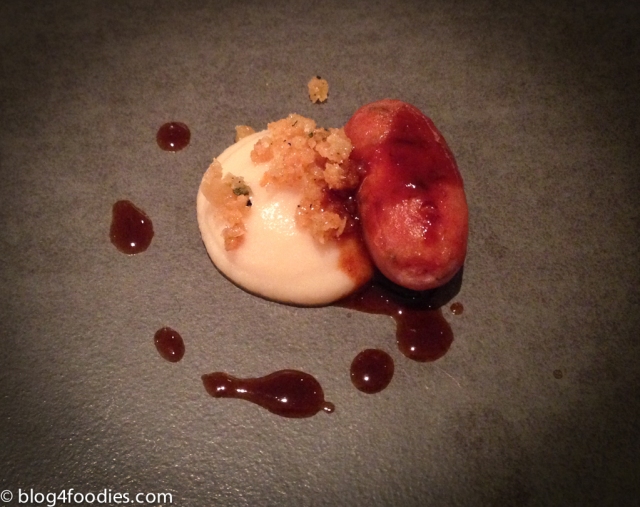 The bread was made in small molds and was really delicious. The butter served was from the Swedish producer Vallmobackens smör which is a butter I like a lot (Vallmobackens butter is also used at Noma among other restaurants).

This dish had three different textures of tomato and the scallop itself was of outstanding quality and taste. The powder consisted of roe from scallops (I think…). 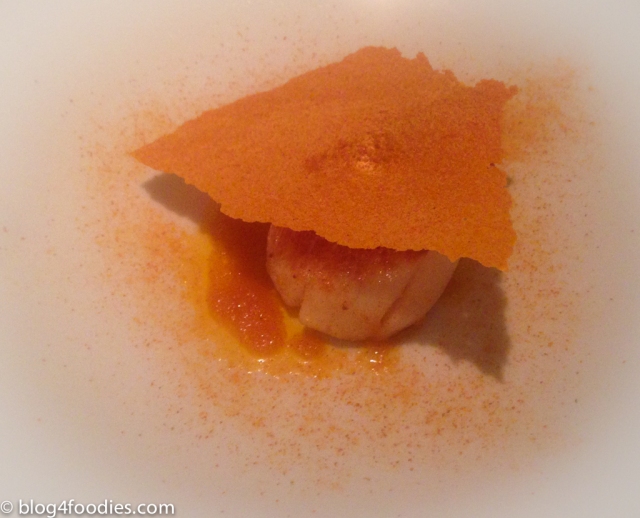 The butter used for this dish was browned at the table with the help of a Bunsen burner. Egg yolk was prepared at 63C. Also a tasty dish! 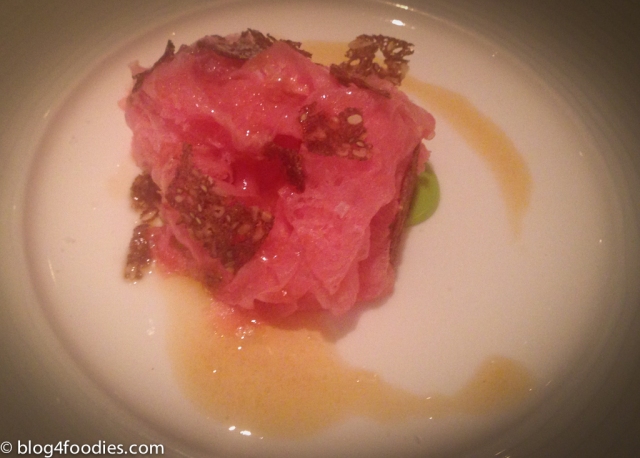 Nothing to complain about when it comes to the taste. However, the texture in regards to the Monkfish was a little bit rubbery, but again, a very tasty and good dish. 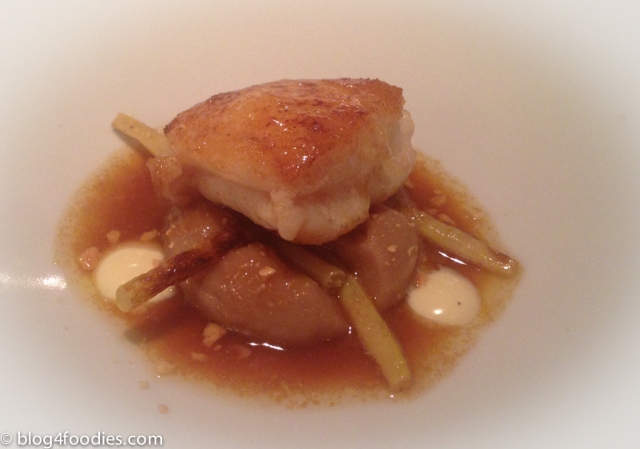 Refresher made of fennel and lemon

Ox cheek, horseradish, crayfish foam, beetroot powder… Even though I liked this dish I think the ox cheek was a little bit to dominant. Served with an Ale (Blå Chimpanse from the Danish brewery Skands) that worked well with the dish.

Port wines for the cheeses

Cucumber “snow” and ice cream of apples and celery 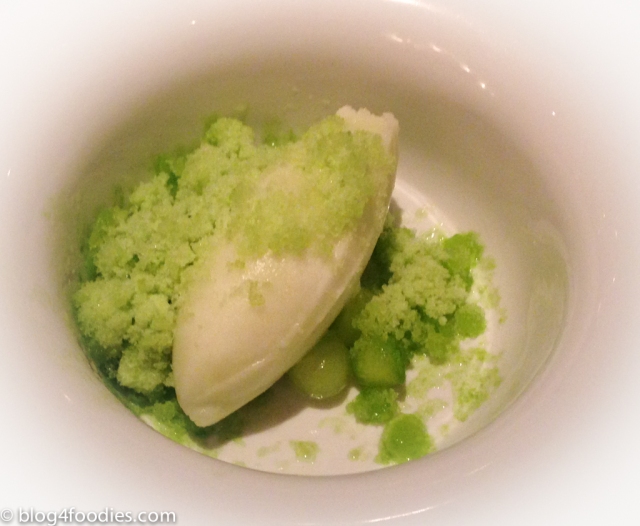 We did not opt for any coffee or tea so we got the petit four in a box to go.

We also got a “christmas pig” of marzipan as a take away.

To summarize: excellent high quality and very tasty food. Best dinner I have had on a restaurant in Gothenburg (and I have visited “all” top restaurants including those with Guide Michelin stars there and the newly opened Upper House Dining). The flavors are always in the “first room” at Linnéa Art and most dishes are also very well balanced and this is unfortunately not always the case.

My friend was also happy with what we got but added that he thinks some dishes were a little bit too “mushy” and would have benefit from some more additional crisp textures and I fully agree with that. Furthermore, he thought that maybe the foam texture was used a notch too much.

For me, it is just ridiculous that restaurant Linnéa Art does not have one single star in Guide Michelin. The two 2-stars Guide Michelin I visited at Sicily a month ago are both clearly inferior to Linnéa Art and they have both since my visit there regained new confidence in the Guide Michelin guide for Italy in regards to 2014 (i.e. they keep their two stars rating). I actually asked the restaurant if they had noticed any inspectors from Guide Michelin and they said they have been visited by a one from UK and I wonder if this is the reason for the tough judgement in Scandinavia in general, i.e. that countries like for instance Italy, Spain, France and Germany have inspectors from their respectively country but that the Scandinavian countries have inspectors coming from other countries. This may sound like a conspiracy theory but I have for so many years now noticed such a huge difference in the judgement of the Scandinavian restaurants (e.g. Noma and Frantzén) in comparison to the restaurants in other european countries that I really wonder why this is the case. The only real downside of some Nordic restaurants is that they usually are more expensive than their southern European counterparts, at least when it comes to the wine markups. That said, in accordance to my knowledge, this (i.e. the price) should not be reflected in regards to the Guide Michelin stars rating (this is not a Bib Gourmand restaurant…).

Anyway, restaurant Linnéa Art is a very good restaurant well worth a visit regardless of stars in the Guide Michelin or not… Highly recommended!