Centrifuge in the kitchen – A buying Guide

A centrifuge is a useful tool that has gained an increasing interest for kitchen applications the last couple of years. Famous chefs, like Heston Blumenthal and Andoni Luis Aduriz (Mugaritz), have used it for years and also reference to it in their cookbooks for some recipes.

So what can you then do with a centrifuge (aka fuge)? Basically it is a very effective tool for filtering/separation by the use of gravity. A centrifuge use rotational forces to separate food into layers by density:

Note: for more food and drink related suggestions I recommend you to check out Dave Arnolds  (a pioneer in using the fuge in the kitchen and bar) excellent book Liquid Intelligence (not only for fuge applications) and spinzall.com (also; see my update in the end of this post). Also, the Modernist Cuisine (the “big” five volume one) has some applications for the centrifuge.

I was for instance making a Caprese salad with a twist were some tomatoes used were made semi-transparent by the help of a centrifuge (see pic below). 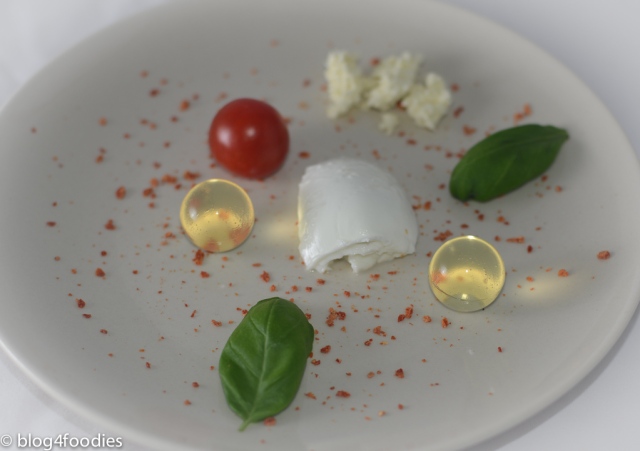 So what should you consider when buying a centrifuge? From a pure functional perspective there are three main features to consider:

Unfortunately, most of us also need to take the following constraints into consideration when deciding what centrifuge to buy:

The first feature can immediately be removed from the equation since you want a centrifuge with a cooling capacity (i.e. with a refrigerator). This though a centrifuge in many cases needs to be run for a period of several hours and this in combination with the friction created by the air (in the centrifuge chamber containing the rotor holding the bottles) not only can cause damage to the food from a pure taste perspective but also make it dangerous to consume.

For the two remaining functional factors (volume and g-force possible) you basically want those two figures to be as high as possible.

That said, for most people it is not possible to buy a very high a capacity (meaning both a large volume and a high RCF) centrifuge. First of all it is very expensive. The centrifuge used in the Modernist Cuisine cookbooks has a capacity (I think) of 3 liters and a g-force of (at least) 27500g in their recipes. A three (3) liter centrifuge capable of 27500g is out of reach for most chefs from a pure economical perspective (especially the home chefs paying for it themselves…). Also, a centrifuge having this capacity is very heavy and also occupies a large floor-space.

When I started to investigate what centrifuge to buy I was initially trying to follow the Modernist Cuisine numbers from above but it basically become to expensive, so I actually asked Modernist Cuisine what they recommended (in the book they recommend a 3 liter by 30000g fuge) and I got a good answer from Scott Heimendinger (known for running the seattlefoodgeek food-blog and who is now also working for Modernist Cuisine) who have used a centrifuge in his home for several years. To summarize he said that you should buy as high capacity you can afford but what you basically need for most application is a fuge capable of more than 1500g and at least a volume of 2 liters (his own home-fuge is capable of 1500g and 2 liter and he said the he could do most of the applications in the Modernist Cuisine with this).

So what is the constraint of running a centrifuge with, for instance, a capacity of 5000g, when the recipe suggests 27500g (as in the Modernist Cuisine recipes) and for example a running time of one (1) hour? A rough time estimate-translation is: 27500g/5000g * 1 hours which roughly equals a little bit more than five (5) hours in this case.

I also consulted Dave Arnold (cookingissues.com) for a second opinion and he also recommend opting for quantity/volume. Dave have several times in his radio program (on Heritage Radio Network) said that the sweet-spot for a restaurant in regards to the price/performance ratio for a centrifuge is:

Worth noting is that Dave, with his extensive experience and expertise in using a centrifuge in the kitchen (and in the bar), often use something named Pectinex Ultra SP-L which is a specialty enzyme that breaks down the pectin structure. Typically used in juice manufacturing, Pectinex has several unique applications in the Modernist kitchen. It can be used to perfectly peel and supreme citrus fruit without using a knife. SP-L aids a lot in clarification of juices either with or without a centrifuge. Consequently, Pectinex (and other enzymes) could substantially decrease the run-time needed to clarify a juice in the fuge (or to put it differently; by using enzymes such as Ultra SP-L, the demands for a very a high g-force fuge is less demanding).

A centrifuge consists of the following parts:

Rotors (that holds the bottles in the fuge) could be of two different styles:

As can be seen in the left picture above there are four bottles in each adapter (i.e. the green part in the pic) and one adapter for each bucket in the swinging-bucket rotor.  Another adapter option (for the same bucket and rotor) can be one holding only one bottle (large or small).

In general the swinging-bucket rotor can take bigger bottles but at a lower g-force in regards to the fixed-angle rotor (however, the really expensive high-capacity rotors are always fixed-angle ones but those centrifuges and rotors are out of the questions  for most kitchens from an economical standpoint).

As the name indicate, the swinging-bucket rotor, will have the bottles “swinging” out (when the centrifuge starts)  and will in a moment after start have the bottles in an angle perpendicular to rotor axle (i.e. perpendicular to how the bottles are oriented in the left picture above). In contrast the bottles in the fixed-angle rotor will have a fixed angle all the time (i.e. the angle you can see in the right picture above). As a consequence of those two different design approches the resulting layers of the food/juice ends up differently in the bottles after the centrifugation for the two different rotors. The two schematic pictures below shows this difference schematically:

So which centrifuge did I finally opt for myself? I was initially opting for a Beckman-Coulter X30-R (R for refrigeration) which has a capacity of 1,6 liter and roughly 4000g but since both Scott and Dave recommended to go for a higher volume I finally bought a Beckman-Coulter X15-R with a rotor supporting a maximum of 3 liters (4x750ml) together with a maximum RCF of 5250g.

I also bought adapters for the rotor so I could also use 250ml bottles (e.g. 2x250ml or 4x250ml) and I have honestly not used anything else but the 250ml bottles. However, I have not had that much time yet to run and experiment with the fuge but I anyway think (for home usage and my personal needs) that I maybe should have gone for the smaller capacity one (supporting 1,6 liters which not only was less expensive but also had a smaller more convenient foot-print).

I bought a new one but I know that both Scott and Dave have bought used centrifuges. Dave bought his on eBay very cheap. If you buy a used on, it is important that you consider the following things:

UPDATE: Dave Arnold has developed and designed a centrifuge specifically for kitchen and bar applications. This centrifuge is fundamentally different in comparison to the ones described above (i.e. that are the ones present on the market today…). Not just much less expensive (currently $799, but for the moment they do not accept any more pre-orders), but also with a much smaller footprint and lower weight. Dave has ran a crowd funding campaign (that ended January 31, 2017) and have now decided to manufacture this new centrifuge. Check out this site for more details: spinzall.com

Like Loading...
This entry was posted in Centrifuge, Food and tagged centrifuge, centrifuge buying guide, centrifuge in the kitchen, fuge, kitchen equipment. Bookmark the permalink.

20 Responses to Centrifuge in the kitchen – A buying Guide