At the 2-stars restaurant La Madia in Licata, chef Pino Cuttaio uses traditional ingredients with a twist, for instance rice balls with red mullet ragout and wild fennel or salt cod smoked over pine cones. La Madia is the only restaurant on Sicily with three forks (i.e. tre forchette) in Gambero Rosso and is by many appreciated as the best on the island.

Licata is a rural town on the south coast and is basically not worth visiting, apart from maybe restaurant La Madia then. There are however some nice beaches some kilometers west of the town…

Restaurant La Madia is not easy to find, especially not if you type in the address on your GPS which, at least for me, meant a completely different destination then where the restaurant is located (I have also read other people experiencing this problem). I was however lucky to spot a sign for the restaurant when driving and could therefor identify it.

The restaurant is located on a busy street and has only one dining room which has high ceilings dressed with pictures (no windows if I remember correctly).

Chef Pino Cuttaio, native of Licata, owns and runs this restaurant together with wife Loredana. All ingredients are sourced locally.

I had the Classic Menu (but was actually expecting to have a lunch menu but this was not an option; see “summary” below for details):

Pizzaiola: salted cod, smoked by pine cone. This “pizza” is not what it looks like and turned out to be very light (which is hard to understand from the picture below). The “melted cheese” was in reality a potato mousse. The crust was only a crispy very thin round of dough.  Under the “cheese” was salted cod smoked on pine wood.

Mozzarella… Or actually a deconstruction mozzarella dish with a nice flavor of mozzarella buffalo, but with a featherlight texture. Served with a tasty tomato coulis. Good! 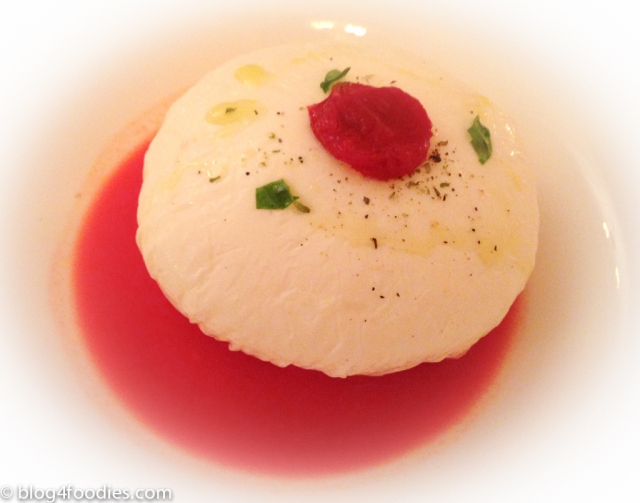 Rice balls with red mullet’s ragout and wild fennel. I did not fully appreciate this dish and could honestly say that the 70 cent rice ball (arancini) I was eating at a friggitorie (fried food shops) in Palermo named  I Cuochini was more appealing (according to my taste buds at least, but I Cuochini is known to be one of the best friggitorie in Palermo). 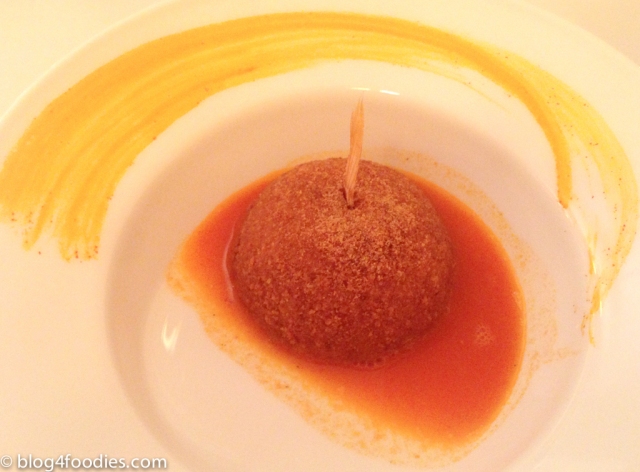 Main… I cannot remember the details here but I enjoyed the flavor combinations of this fish based dish. Good!

“Waiting for Dessert”, this pre-dessert was not that tasty: 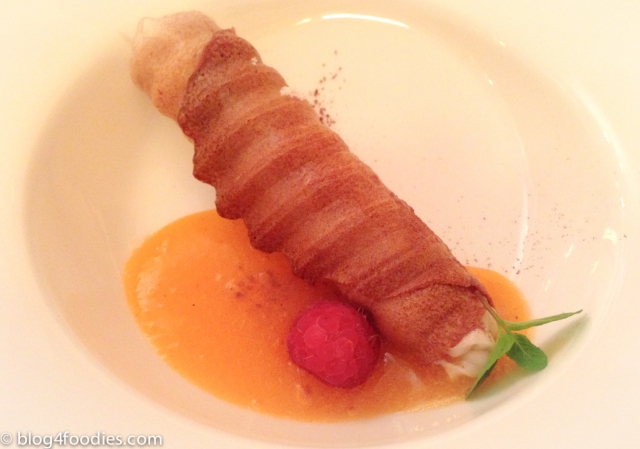 Dessert: here you had the options to chose from a variety of different alternatives and I opted for gelato (ice cream) and this was really good:

We were then served a second dessert and even though this also were a ice cream, it was completely different in regards to the one above, but maybe even better: 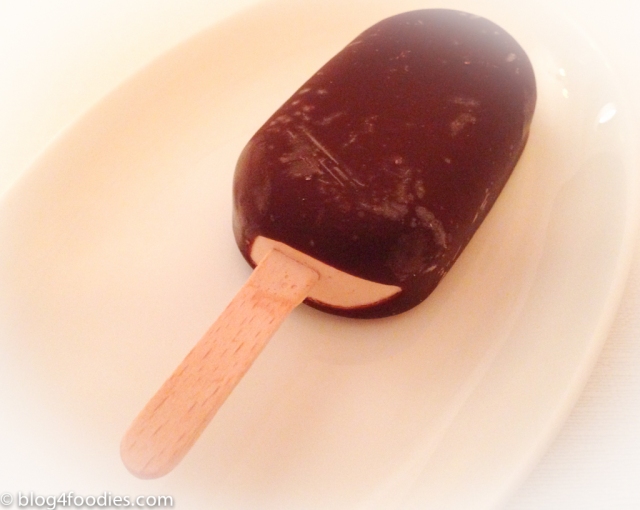 Hard to believe but this lunch started out even worse then the dinner the night before. Reason was that I had promised my lunch companion (who I also ate with the night before and who then were extremely disappointed with the meal and who definitely did not want to attend another 2-star restaurant…) that we only should have a “lunch menu”. When I mailed about the reservation I explicitly asked if La Madia had a lunch menu and I got a written reply that they had this (i.e. that they were serving a lunch menu on lunch).  I would otherwise never be able to have my friend attend this restaurant for lunch. Fact is that La Madia do not have a lunch menu and do only serve their regular menus for lunch (this discrepancy may relate to language barriers though my communication with the restaurant were in English). Now my “lunch buddy” wanted to leave the restaurant… Let me just say that this lunch did not turn out the way I wanted.

Add to this, that I was personally not that happy with all the food served… But I do not want to make a final statement about this restaurant. The reason is that the “mode” affected (infected…) the overall experience in such a bad way that I cannot honestly and objectively say anything definitive about La Madia. However, when I in retrospective go through my pictures and memory I get a different view of the restaurant in comparison to when I ate there, i.e. a more positive one. That said, I am still skeptical in regards to the restaurants 2-stars rating (especially in comparison with many 1-star restaurants in Scandinavia that I consider “better”; but also more expensive…).

Lessons learned: do not attend a fine dining restaurant with someone explicitly not interested in fine dining… Also, I thought I had some good intelligence (e.g. the 2-star Guide Michelin rating, the three forks in Gambero Rosso and quite some food blog reviews) about this restaurant, but that said, the main reason for visiting Sicily was “ordinarie” vacation and not its restaurants (but usually good restaurants constitute my vacations…). Still, I read many articles about the good food on Sicily before my departure and did also eat at the two most top rated ones (both with 2 Guide Michelin stars) together with some other eateries with good reviews and must admit that I am a little bit disappointed. The best meal (on Sicily), from my perspective, was a Bib Gourmand restaurant in Palermo named Santandrea but I did also have some good street food in Palermo as well.